T-Mobile is running a clever little ad campaign urging mobile phone customers to send their controlling carriers a breakup letter. It’s all about early termination fees, which keep customers tethered to their current carrier for the duration of their contract. These fees help carriers recoup the cost of subsidizing the mobile phone hardware – for example, a $499 smartphone can be had for free with a 2-year contract. If the customer wishes to leave before the carrier can earn out their $499 plus a tidy margin, the carrier recovers the unpaid balance via early termination fees.

I wonder whether energy customers would like to send their controlling utility companies a breakup letter too. Residential customers in Hawaii and commercial customers paying demand charges in California probably like the idea quite well. Their electric utilities, asleep at the wheel while innovations in energy efficiency, generation and storage reduce demand for their product, have been levying early termination fees of a different sort. Imagine hundreds of millions of dollars tied up in a centralized, coal-fired power plant. Ten years ago the plan was to earn out this whopping upfront investment – plus a reasonable return – over the next 30 years from $$/kWh paid by a captive audience of energy customers. Trouble is, the audience is no longer captive. Energy customers are being more efficient. They are buying or leasing rooftop solar and in some places, going completely off grid. As demand for the utility’s product wanes, meeting this 30-year obligation requires these electric utilities to increase their energy prices in order to keep the shortfall at bay. Increasing energy prices, in turn, further decreases demand and perpetuates the cycle. Energy customers unwilling or unable to employ efficiency, generation or storage innovations are left behind to pay these higher energy prices – akin to early termination fees.

Dramatically, the Rocky Mountain Institute just published data crisply answering the question of when it will become economically viable to defect from the energy grid entirely using solar photovoltaic (PV) panels plus lithium ion battery technology. The answer is an unequivocal “now” in places like Hawaii and within the next 10 years more broadly. More and more utility customers will be terminating early, well ahead of when the electric utility will recoup its earlier investments in centralized energy generation. 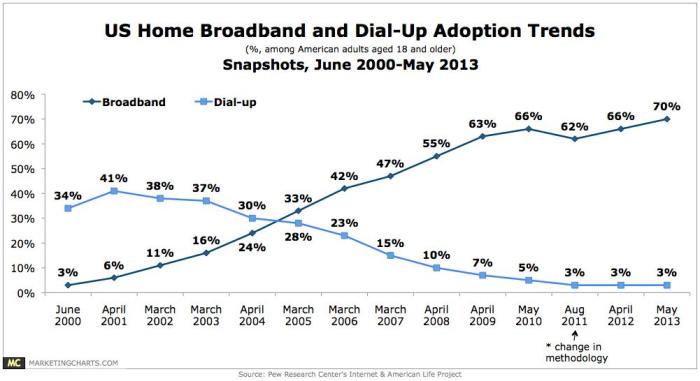 As a result, customers are breaking up with their wireless carriers and their electric utilities with more breakups on the way. How do you connect to the Internet at home – digital subscriber line (DSL), cable modem, fiber, wireless, satellite, broadband over powerline (BPL)? According to the Organization for Economic Cooperation and Development (OECD) nearly 70% of all U.S. households have broadband connectivity and the mix of technologies used lays out like this:

Penetration of broadband internet access has fundamentally shifted the way media content gets consumed. Most of Gen Y – raised on the Internet – consumes their media content via the web. Armed with their Netflix, Hulu Plus and other Internet-based content subscriptions and the control they provide over what, when and where, Gen Y is shunning traditional television content from the Comcasts and DirectTVs of the world. The only gap in this strategy is live sports content. Often this gap gets closed at bars where the social dynamic of enjoying live sports with friends and food service trumps the convenience of home. Plus, more and more live sporting events can be watched in real time on the Internet via applications like ESPN’s WatchESPN family of device-specific, content-streaming applications for homebodies. 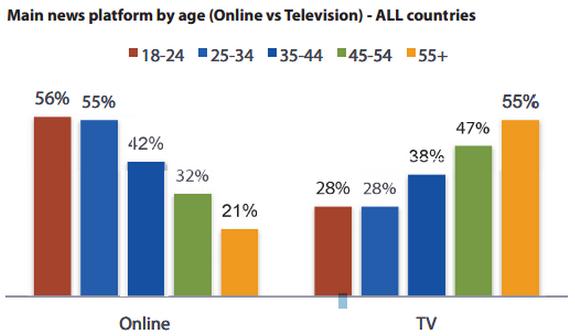 Broadband equals streaming, and broader band is better. Innovations yielding faster and faster connection speeds are driving the penetration of fiber throughout major metropolitan areas. Fiber is even winning in rural Greenfield developments that put the “ease” in easement, helping to keep the cost per foot of delivering fiber lower than fiber in urban areas rife with right-of-way issues. Before long, fiber companies will own the connection to the home, like electrical utilities, and yet this connection will be under siege soon as well.

Ever wonder why there are two different wireless networks; why your smartphone shows bars of connectivity to your cellular network while also providing Wi-Fi access to your local home, hotspot or work network? By any chance do you have Voice Over Internet Protocol (VOIP) phones at the office, or even at home via providers like Vonage? A massive shift is afoot, fueled by innovation. Convergence is coming. With the rollout of fourth-generation / long term evolution (4G/LTE) technologies in the cellular networking world comes the acceptance of data, not voice, as the dominant packet being marshalled around. Data means packet switching using the Internet Protocol (IP). Voice is not left out entirely; it too can obviously be marshalled around using IP, so all networks are converging on a single, flat, IP-based technology. Speeds are increasing as well. A third-generation carrier network (3G) can deliver speeds of 1.5 to 3 megabits per second (Mbps) while a 4G/LTE network can deliver 10 to 20 Mbps, today. These speeds are already as good as or better than DSL. Plus the theoretical limits for 4G/LTE approach 100 Mbps down and 50 Mbps up, landing in the realm of fiber solutions. Work is already beginning on the fifth-generation cellular network (5G), with the goal of achieving a flat, all IP-based network and theoretical speeds in the 1 gigabit per second (Gbps) range.

Another breakup letter is in the works. This letter severs ties with Internet Service Providers (ISP) providing underground connectivity (i.e., DSL, cable, fiber) and, ironically, puts mobile carriers front and center once more, but not necessarily the same mobile carriers we know and love today. Coming full circle back to mobile telecommunications purveyors is not the most interesting realization, however. Imagine a world where you do not need to be tied to an electric utility for power or an ISP for connectivity. No ties mean freedom. Sure, you could plop your super energy efficient house with Gbps connectivity anywhere there is sufficient sunshine, wind or both, and a wireless broadband access point. But that is the least interesting ramification, enmeshed as it is in the larger socioeconomic ebbs and flows of urban versus rural renewal. Even more mind-bending are the truly mobile notions. All-electric vehicles covered in flexible solar collecting skins and sporting Gbps connectivity would rarely need to dock, would provide passengers and surrounding vicinity full fidelity access to the Internet, could participate in a bevy of two-way, data-intensive telemetry services and be commonplace. Mobile telemedicine clinics would deliver Western-style medical services to remote, impoverished areas of the world, economically. Beach umbrellas made from foldable solar-collecting fabric, a handle filled with batteries, a Wi-Fi hotspot and a 120V AC receptacle would dot sandy shores everywhere.

As the inspirational music fades, keep the breakup letter in mind. If you are not penning a letter to Verizon Wireless or Duke Energy or Comcast you may find yourself paying too much and labeled a Luddite. After all, innovation changes everything.

View all posts by gonzorourke